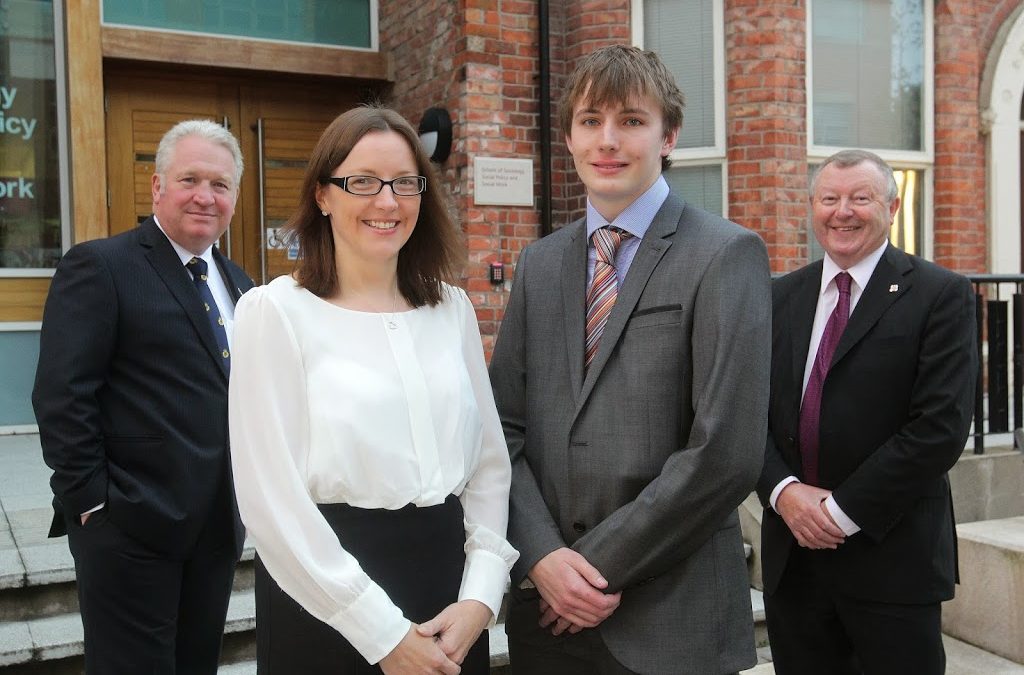 A GROUP of Orange students have been commended after completing a leadership course, co-coordinated by one of the Province’s leading universities.

A certificate presentation ceremony at the Belfast campus was attended by Mike Penning MP, Minister of State for Northern Ireland.

The ‘Leadership and Management’ course is delivered in partnership between the STRIPE Project, funded by the European Union’s PEACE III Programme, and Queen’s University.

“There will be several benefits to those who have participated on the course such as a recognised qualification from Queens University Belfast, students have been provided with the opportunity to analyse the concept of leadership and the role that leaders play in initiating and implementing change and reform. Students have been encouraged to participate and debate examples that benefit Northern Ireland and the border counties of the Republic of Ireland.”

The course also included a visit to Hondarribia in Northern Spain to study the management of contentious parades.

Offering his congratulations to all those who participated, Mr Penning said:

“I am delighted to see so many young people actively involved in this exciting and important course. They are leaders of the future and the skills and experience they have gained will ensure that they are better equipped to play a positive role within the community in the years ahead. I wish them and the course every success in the future.”

“I would like to pay tribute to all those students who have successfully completed this inaugural leadership course. I have no doubt the skills they have acquired will be of huge personal benefit to their respective careers going forward. Our appreciation must also go to Queen’s University for facilitating such a valuable educational project.”

“An exciting part of this project is identifying young leaders, building their capacity and developing their skills so that they can play a full role in shaping society. We look forward to the continuing development and growth of this leadership course in Londonderry and Belfast in 2014.”

This year, the Leadership and Management course has been running in Brookeborough, Co Fermanagh. Students are due to travel to Italy next month to explore the management of competing minority cultural rights.

For more information on the Young Leaders course, contact the STRIPE Project on 028 3832 6986 or email info@stripe-project.org

In April 2012, the Orange Order received a grant of almost £900,000 from the European Union to help address the legacy of the Troubles in the Protestant community, particularly in interface and border areas of Northern Ireland and the border counties of the Republic of Ireland.

Seven full-time staff are working on the project which is being financed until December 2014.

The STRIPE Project received £884,022 from the Special EU Programmes Body.

The Special EU Programmes Body is a North/South Implementation Body sponsored by the Department of Finance and Personnel in Northern Ireland and the Department of Finance in Ireland. It is responsible for managing two EU structural funds Programmes PEACE III and INTERREG IVA designed to enhance cross-border co-operation, promote reconciliation and create a more peaceful and prosperous society. The programmes operate within a clearly defined area including Northern Ireland, the Border Region of Ireland and in the case of INTERREG IVA, western Scotland.

The PEACE III Programme, funded under the European Regional Development Fund (ERDF), is worth €333 million and is aimed primarily at reinforcing progress towards a peaceful and stable society and promoting reconciliation. It focuses on helping Northern Ireland and the Border Region of Ireland to reconcile communities and contribute towards a shared society.

For more information on the SEUPB please visit www.seupb.eu