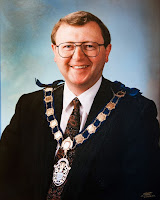 Neither LOL 1845 or the Croom Elbow Orange Centre would have been possible without the leadership and dedication of the late Grand Secretary, Bro Nelson.

His support and encouragement through it’s early years insured the long term success of the Lodge and he was one of the first to propose the idea of the Orange house He managed the original acquisition and the tenancies and he was responsible for the vast majority of the funding raised, either through direct donations, or through managing fundraising endeavours.

It is a testament to his ability, and to the high regard in which he was held, that his last, great fundraising initiative (which was for Croom Elbow), raised over £18,000.

His vision, foresight, and above all, enthusiasm, has made all this possible.

He is greatly missed by all the Officers and Brethren of LOL 1845.