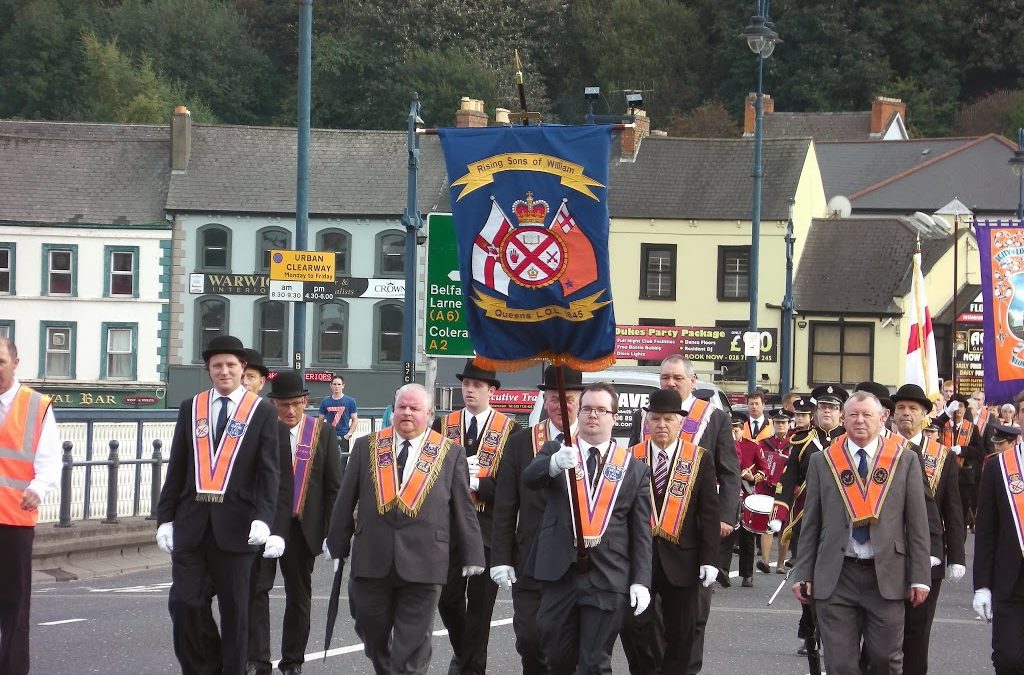 The Lodge paraded from Bonds Street in the Waterside to St. Columbs Cathedral via Craigavon Bridge and the Diamond War Memorial.

We were accompanied by the Grand Master and Grand Secretary of Ireland, Officers and Brethren from the City Grand Lodge of Londonderry, Sisters from the Loyal Association of Orangewomen, the County Grand Master of the Royal Arch Purple Chapter and Junior Brethren and Sisters.

The parade was led excellently by Killaloo Accordion Band.

A special service of Choral Evensong was held at St. Columb’s Cathedral, Londonderry, for the Officers and Brethren of Queen’s University Belfast L.O.L. 1845 and guests.

The Dean, the Very Reverend Dr. William Morton welcomed the lodge to the Cathedral, and in particular, the Grand Master, the Most Worshipful Bro. Edward Stevenson who was in attendance.

The Choir sang the entire service, which included Psalm 118: 14-29 and the canticles Magnificat and Nunc Dimitis.

During his address, Reverend Gamble spoke about the life and times of Nehemiah, the great Hebrew leader who rebuilt the walls of Jerusalem. He said, “Nehemiah was a man of vision, a man who not only saw the need of his people, but who acted to meet that need. He gathered around him a team to rebuild the walls of Jerusalem and successfully withstood opposition from without and conspiracy from within. He was a man of faith who God used to renew the life of his people and to give them hope for the future.” Reverend Gamble went on to encourage lodge members to be leaders of the future by rebuilding the lives of people around them and by restoring the fortunes of their community.

The Anthem for the service was Urbs Fortitudinis (We have a Strong City), sung to a setting by Michael Franklin, sometime organist of the Cathedral. William Blake’s acclaimed hymn Jerusalem also featured as one of the hymns.

Worshipful Master of the Queen’s University lodge, Worshipful Bro. Mark Dunn LL.M., thanked the Dean and Choir for the service, and congratulated them on their efforts as part of the UK City of Culture 2013. He also thanked the City Grand Lodge of Londonderry, for all their help in organising the Parade and Service on the Lodges behalf; the Band, for it’s excellent playing to and from the service; and all the guests for attending.

An excellent day in Londonderry was completed with a return parade to the Waterside in beautiful autumn sunshine.