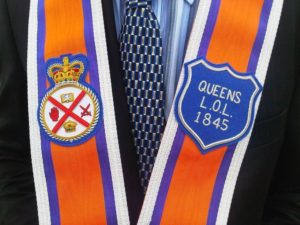 Over the past number of months and weeks there has been increasing speculation as to the passing of an Irish Language Act into law in Northern Ireland. We have witnessed Arlene Foster, along with other DUP members, gradually soften their anti-Irish Language Act rhetoric over this period. Multiple media outlets are now reporting that this act is likely to be ‘fudged’ into law alongside a token Ulster-Scots bill.

We would like to make it clear that the Unionist people of this Province have no appetite for an Irish Language Act.

Neither have they any appetite for any legislation that enshrines the Irish language onto the Stormont statute book by the back door. Such a piece of legislation cannot be seen as a trade-off which furthers the Unionist cause, or indeed Northern Ireland as a whole, in any way shape or form. Concessions for Ulster-Scots do not hide the fact that an Irish Language Act will have far ranging ramifications across civil society. None of which will have a positive impact on the nation. The Unionist community must make it resoundingly clear that no amount of funding for Ulster-Scots, bands or other cultural activities can be accepted in lieu of this act. Quite simply put, there is no price at which the Irish Language Act can be allowed into law.

The promotion of cultural supremacy, under the guise of equality, will only further entrench divisions in Northern Ireland. It paves the way for public expenditure on education and civil infrastructure to appease a language spoken as a main language by only 0.2% of the population. Money that will be diverted away from our hospitals to indoctrinate generation after generation of school children. Where is the tangible benefit in that for Northern Ireland?

While we know that there are those within the DUP who do strongly oppose the Act, their silence has been deafening. While many may not wish to put their head above the parapet when it is easier to toe the party line, the rumours of this Act cannot go unchecked. It is not too late to act. We would therefore urge all DUP members from the grassroots, to Councillors, MLAs and MPs to publically express their strong opposition to such an Act.

We would further encourage you, the electorate, and the people who put the DUP’s elected representatives into power, to voice your opposition. Contact the social media outlets of the Party, visit their constituency offices and e-mail/telephone your local representative. It is imperative that you take this action now. Viewing the current situation apathetically will only further strengthen the resolve of those within the DUP who believe it acceptable to legislate for such an Act.

When the pages of history are written there are two ways in which the events of the coming days may be remembered. Either it will be remembered as the occasion Unionism stood firm and defeated an Act which paved the way for a Republican state in all but name. Or, alternatively, it will see the current crop of DUP politicians, and grassroots members, remembered as the people who failed Ulster in her hour of need; the people who chose political expediency and self-preservation over the needs of the people they were elected to represent.

If you require any further details on how to contact your local elected representative please contact our page.