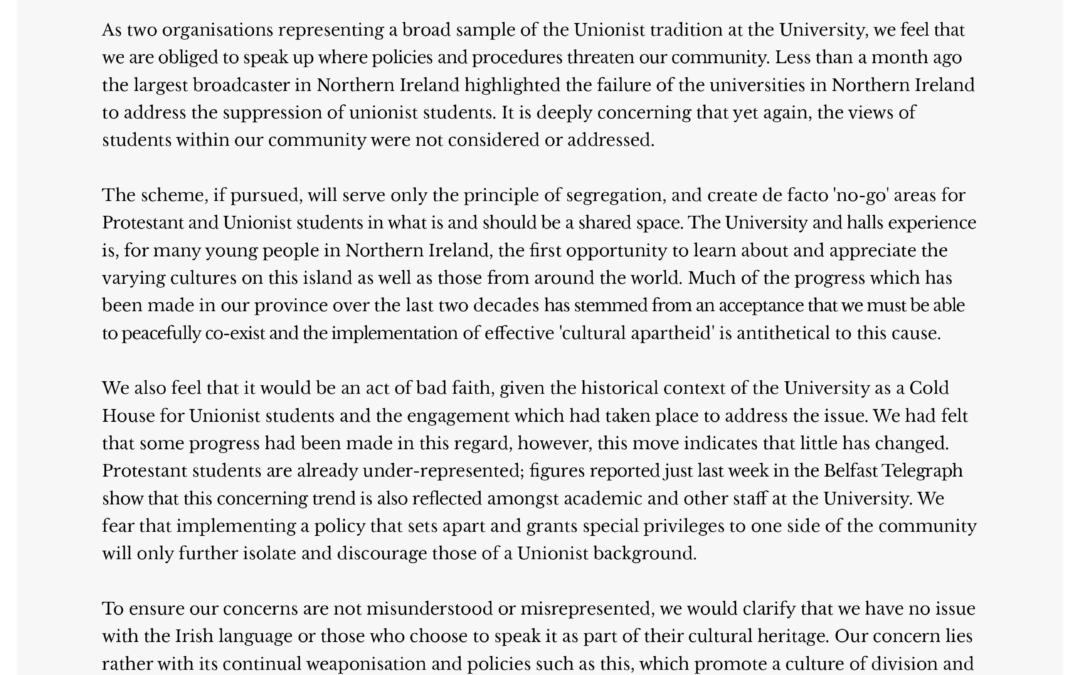 The Queen’s University of Belfast (QUB) Student Orange Society and the student & alumni lodge, The Rising Sons of William (Queens) LOL 1845 have issued a joint statement regarding the concerning announcement of a new Irish Language Residency Scheme, championed by the University in association with An Cuman Gaelach.

“Our universities should be a shared space and have an opportunity to drive progress by promoting understanding between students of different political and religious backgrounds in our country. This policy flies in the face of that and encourages division, further isolating those from a Unionist background in University life and wider society.”

On behalf of our membership, we would like to express our deep disturbance and concern around the University’s recent decision to launch an Irish language exclusive area within its halls of residence.

As two organisations representing a broad sample of the Unionist tradition at the University, we feel that we are obliged to speak up where policies and procedures threaten our community. Less than a month ago the largest broadcaster in Northern Ireland highlighted the failure of the universities in Northern Ireland to address the suppression of unionist students. It is deeply concerning that yet again, the views of students within our community were not considered or addressed.

The scheme, if pursued, will serve only the principle of segregation, and create de facto ‘no-go’ areas for Protestant and Unionist students in what is and should be a shared space. The University and halls experience is, for many young people in Northern Ireland, the first opportunity to learn about and appreciate the varying cultures on this island as well as those from around the world. Much of the progress which has been made in our province over the last two decades has stemmed from an acceptance that we must be able to peacefully co-exist and the implementation of effective ‘cultural apartheid’ is antithetical to this cause.

We also feel that it would be an act of bad faith, given the historical context of the University as a Cold House for Unionist students and the engagement which had taken place to address the issue. We had felt that some progress had been made in this regard, however, this move indicates that little has changed. Protestant students are already under-represented; figures reported just last week in the Belfast Telegraph show that this concerning trend is also reflected amongst academic and other staff at the University. We fear that implementing a policy that sets apart and grants special privileges to one side of the community will only further isolate and discourage those of a Unionist background.

To ensure our concerns are not misunderstood or misrepresented, we would clarify that we have no issue with the Irish language or those who choose to speak it as part of their cultural heritage. Our concern lies rather with its continual weaponisation and policies such as this, which promote a culture of division and polarisation, attempting to make young Protestants feel like strangers in their own home.

Queen’s University Belfast has a responsibility to all its students irrespective of their cultural and religious background. We would urge the University to seriously reconsider this policy which would create an environment for one culture to flourish, whilst ignoring the legitimate concerns of another.