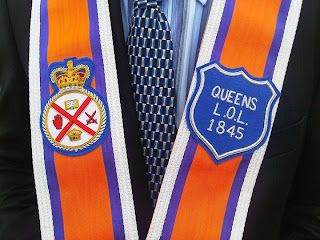 The Master and Members of the Lodge must, before accepting a prospective member, satisfy themselves with all due solemnity previous to this admission that he possesses the following qualification. It is to these criteria that every Orangemen should dedicate himself.

An Orangeman should have a sincere love and veneration for his Heavenly Father, a humble and steadfast faith in Jesus Christ, the Saviour of mankind, believing in Him as the only Mediator between God and man. He should cultivate truth and justice, brotherly kindness and charity, devotion and piety, concord and unity, and obedience to the laws; his deportment should be gentle and compassionate, kind and courteous; he should seek the society of the virtuous, and avoid that of the evil; he should honour and diligently study the Holy Scriptures, and make them the rule of his faith and practice; he should love, uphold, and defend the Protestant religion, and sincerely desire and endeavour to propagate its doctrines and precepts; he should strenuously oppose the fatal errors and doctrines of the Church of Rome and other Non-Reformed faiths, and scrupulously avoid countenancing (by his presence or otherwise) any act or ceremony of Roman Catholic or other non-Reformed Worship; he should, by all lawful means, resist the ascendancy, encroachments, and the extension of their power, ever abstaining from all uncharitable words, actions, or sentiments towards all those who do not practice the Reformed and Christian Faith; he should remember to keep holy the Sabbath Day, and attend the public worship of God, and diligently train up his offspring, and all under his control, in the fear of God, and in the Protestant faith; he should never take the name of God in vain, but abstain from all cursing and profane language, and use every opportunity of discouraging those, and all other sinful practices, in others; his conduct should be guided by wisdom and prudence, and marked by honesty, temperance, and sobriety, the glory of God and the welfare of man, the honour of his Sovereign, and the good of his country, should be the motives of his actions.

In addition to the general qualifications of all Orangeman, all prospective members of The Rising Sons of William (The Queens University of Belfast) Loyal Orange Lodge (of Limited Purpose) Number 1845, must already: